*This post is from two years ago, but I thought I'd share it again this week before you all toss your pumpkins the day after Thanksgiving. :) 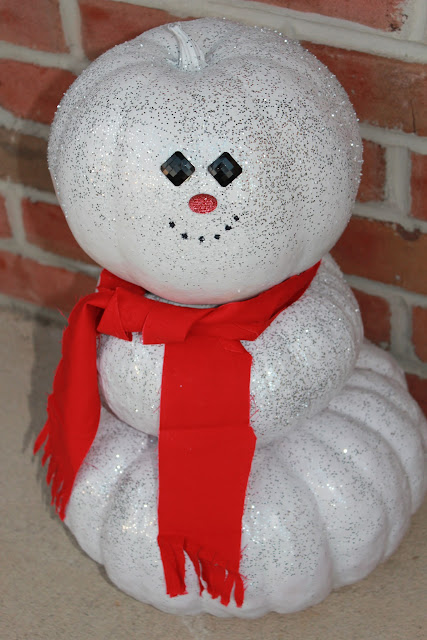 The front of our home is all decked out for Christmas. But as of yesterday morning, a little stack of pumpkins still sat in the corner of our porch... I had already tossed all of our jack be littles and now I SO wish I had kept three of them to make a tiny version for inside... Anyway, I was feeling a little behind not having de-pumpkinized our whole house yet, but all of the sudden I had this idea... It came from two different inspirational sources. I was driving by our neighbors house and saw she had spray painted her pumpkins silver and had greenery and ribbon tucked in between them here and there and they kind of looked like big silver ornaments... Then I thought of how at our fall festival at church I saw a girl paint a pumpkin orangey-yellow and sprinkle silver sparkles all over it and how pretty it looked... and then it hit me "what if I painted them white and used silver and white sparkles on them!? They could become a snowman!"

So I spread out some trash bags in my garage, spray painted the pumpkins white and dusted them with white and silver sparkles while the paint was still wet. Fortunately the spray paint only took an hour to dry, cause I get impatient to get projects finished sometimes and he could have ended up with finger prints all over him from me trying to carry him out to the porch prematurely :) I hot glued on the button eyes and nose, used a sharpie for the mouth, and used leftover red fabric for the scarf. 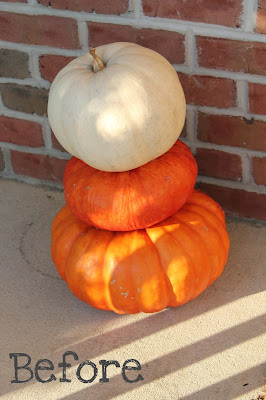 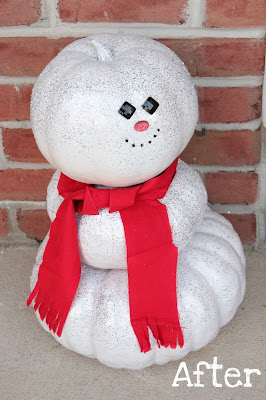 This whole idea made me so excited, not just for the cuteness of it, but also for being able to re-use my pumpkins instead of throwing them away. And I think this little guy will be staying up well through January even after my other decorations come down, that is, if he lasts that long. We will see! 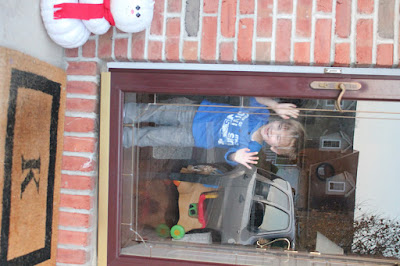 I wish I could have thought of this and shared this idea sooner, I'm suspecting many people have already tossed their pumpkins this year... But there's always next year! Now you can tuck this little thought away in the back of your mind and buy your pumpkins next fall knowing they will serve a purpose a lot longer than in years past :)